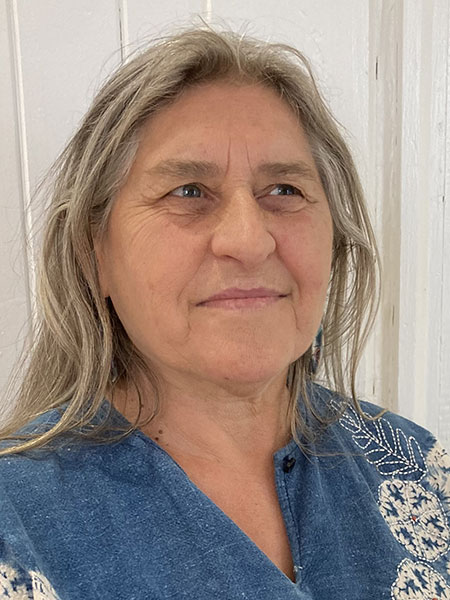 Esther Grav
Esther has been weaving, spinning and dyeing since the mid 1970’s, and received her ‘Certificate of Weaving’ from the OHS program in 1990. She has always loved working with her hands and passing on the love of weaving & spinning to others.

Esther was introduced to felting in early as 2002 and she found there was something more tactile in creating items by Felting. Over the past 20 years, Esther has been exploring the ancient art of wet felting. This exploration has led her to travel and work with master Felters, in Switzerland, England, other European countries, New Zealand, Australia and across Canada.

During the pandemic, Esther has taken online courses to revisit using natural dyes (especially indigo), botanical printing. She now incorporates the use of natural and organic materials in her current work.The idea of exploring new techniques, but still using traditional methods, continues to be her main focus of creativity.

As a Fibre Artist, Esther believes in preserving the traditions of Weaving, Spinning, Felting and Dyeing to ensure these techniques are passed onto future generations. She creates unique wearables and art for the home.

To ask questions or provide feedback regarding the artwork on this page,
please send an email to Esther at gravesther@gmail.com or click the button below.
Contact the Artist